Late-18th Century fashion was so elaborate that a law was proposed to prevent men being taken in by a pretty face.

The 1770 an amendment against “false adornments” was proposed to the Witchcraft act “to protect men from being beguiled into marriage by false adornments,” it said. “All women, of whatever rank, age, profession or degree, whether virgins, maids or widows, that shall, from and after such Act, impose upon, seduce or betray into matrimony, any of His Majesty’s subjects, by the scents, paints, cosmetic washes, artificial teeth, false hair, Spanish wool, iron stays, hoops, high-heeled shoes and bolstered hips, shall incur the penalty of the law in force against witchcraft and like misdemeanours and that the marriage upon conviction shall stand null and void.”

Though never passed and probably meant as a joke this reveals some stark information about the period’s obsession with dress. But just what were some of these false adornments that had such a profound impact on 18th Century fashion and society? 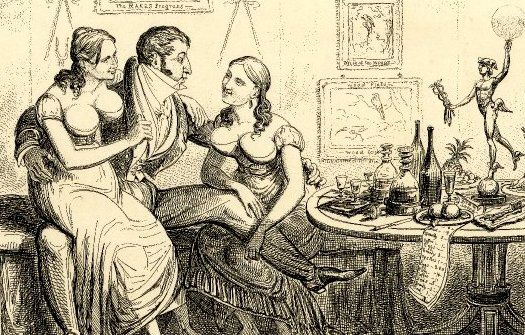 The 18th century was a golden age for the cleavage. While stays were integral to shaping the body in such a way, exposing the breasts even as far as one or both nipples was not uncommon in the period.

In the 1790s amid the French Revolution the maternal image became popular with the chemise dress both emphasising and yet freeing the breasts. It was then that stays were abandoned for a simple ribbon around the waist.

Towards the turn of the century there is evidence that even fake boobs were widespread into the Regency era and made of cotton and wax, perhaps related to the pads some women wore to look pregnant.

An edition of The Oracle newspaper from 1800 took a dim but humoured view of the practice.

“Spite of the gibes of wanton wit, what emblems can the fair, of their dear tender hearts more fit than waxen bosoms wear? ‘Twixt mounts of wax and hills of snow how small the difference felt! With due degrees of heat we know that both will gently melt. My Delia’s heart I find so hard, I would she were forgotten. For how can hearts be adamant when all the breast is – cotton?”

Women also powdered their shoulders and breasts with lead while accentuating the veins on the bosom in blue. This leads us on to our next and more fatal adornment…

Of course no overview of 18th Century appearance would be complete without considering the vast quantities of lead white face and wig powder, or the pink rouge applied on pads of Spanish wool. This was applied heavily in a round or triangular shape to the cheeks while lips were painted small and sharp. The lead caused the eyes to swell and become inflamed, attacked the enamel on the teeth and changed the texture of the skin causing it to blacken. It could also cause baldness and so shaving the front hairline became fashionable. Lead’s toxicity was well known at the time but didn’t stop this obsession inspired by the French court. On 30 September 1760, Maria Gunning, the beautiful Countess of Coventry, died at the age of 27 as one of the most famous victims of lead cosmetics.

Missing teeth caused peoples’ cheeks to look hollow and so along with rouge made from crushed cochineal beetles many inserted cork “plumpers” between their gums and cheeks.

With smallpox a leading killer that left scars on suvivors and many faces damaged by the use of lead, beauty patches were used to cover areas of damaged skin. Made from luxurious fabrics like silk or velvet and coated in a gum adhesive to hold them in place, beauty patches were worn by both genders. Known as mouches in France, meaning ‘flies’, they came in a variety of shapes including crescents, hearts and stars.

Love 18th century fashion? Have a look at our sewing patterns guide or books and join our Facebook group for advice! We also invite you to share your own projects and ideas by submitting your story for us to edit and publish on our platform.