How Toxic is Your Hat?

Have you ever stopped to think about your favourite vintage hat and its connection to the original Mad Hatter in 1865? Fear not for this is not the Daily Mail health column but just a century ago literally thousands of hat makers received chronic exposure to mercury fumes when felting rabbit furs to make headwear. Furs from small animals such as rabbits, hares or beavers were separated from their skins and matted together and an orange-coloured solution containing mercuric nitrate was used to smooth the final product. In factories workers would be exposed to vast quantities of vapours from this solution and the result was a slow but effective poisoning.

Erethism, or mercury posioning, holds all the images of Victorian disease like behavioral changes such as irritability, low self-confidence, depression, apathy, shyness and timidity, and in some extreme cases with prolonged exposure to mercury vapors, delirium, personality changes and memory loss occur as a result.

The process began in 17th-Century France and from there spread to England by the end of the century but it was not until the late 19th Century that regulations started to change a well-known problem. Despite the fact that safer alternatives were developed in the 1870s and 1880s the US continued the use of mercury until the 1940s with some commentators suggesting that only the war re-assigning the use of mercury for munitions stopped the process. In 1934 the U.S. Public Health Service estimated that 80% of American felt makers had mercurial tremors.

As early as 1860 J. Addison Freeman, a physician from Orange, wrote the report “Mercurial Disease Among Hatters” in the Transactions of the Medical Society of New Jersey. He observed that “the usual symptoms were ulceration of the gums, loosening of the teeth, foeter of the breath, abnormal saliva, tremors of the upper extremities, or a shaking palsy. The result of inhaling air impregnated with mercury vapor.” Freeman concluded that “A proper regard for the health of this class of citizens demands that mercury should not be used so extensively in the manufacture of hats, and that if its use is essential, that the hat finishers’ room should be large, with a high ceiling, and well ventilated.” Nevertheless his recommendations went totally ignored.

So how toxic is your hat? 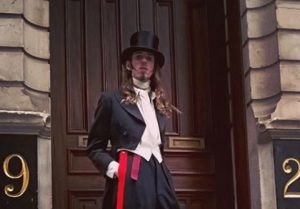 For many researchers the biggest warning faced is in archives like the V&A’s Clothworkers’ Centre in which hats to view are sealed inside plastic bags with skull and crossbones warnings on them. One particular example they describe is a green 1816 bonnet which showed high levels of toxins when their hats were tested a few years ago.

We can generally conclude that older hats pre-mid-19th Century are more likely to carry toxic chemicals, which also includes arsenic among others, but this is certainly not exhaustive. The V&A stresses that not all its antique hats are treated in this way as only some are deemed dangerous – and that is at an occupational level for researchers and conservators. Meanwhile there are cultural and religious practises that actively use mercury and even widely used dental fillings containing mercury have been carefully studied without evidence of significant risk.

Equally we should consider that even today the fashion world and even our surroundings are far from pure if we analyse them closely enough and as long as these toxins stay in the garment we are less likely to consume them.  According to the V&A it was an awareness of the toxicity of mercury salts in the late 19th Century that led silk to overtake the use of beaver fur in top hats. Ultimately it is the factory workers, both then and now, who suffer the worst consequences from hours every day simply trying to make an honest living. For anyone concerned a high-quality reproduction from Etsy could well be the way to get full peace of mind. The Rag’s Steampunk Wishlist has some excellent examples.

For more about that great social injustice as workers suffered for the vanity of the elite, I highly recommend Fashion Victims: The Dangers of Dress Past and Present

by Alison Matthews David. It also includes a fascinating insight into the “germ warfare” of Typhus faced by Napoleon in Russia. The lice in the seams of excavated uniforms still hold the disease 200 years later.

The Costume Rag is a platform about looking fancy in nice clothes and should not be taken as any health authority.