Norwegian photographer Stig Håvard Dirdal was commissioned to produce Christmas cards for  Stavanger Foto, a camera shop on the west coast of Norway. “Being granted full creative freedom in making the card, I went back to the old masters for inspiration. The Anatomy Lesson of Dr. Nicolaes Tulp by Rembrandt in 1632 was a fantastic starting point for my plan,” he said. “Transforming an anatomy lesson into a Christmas present wrapping study just rang my bells. And the fact that the old masters back in 1632 already knew what was coming ringed them even more.”

The lesson can be dated to 31 January 1632 when the Amsterdam Guild of Surgeons, of which Tulp was official City Anatomist, permitted only one public dissection a year and the body would have to be that of an executed criminal. Anatomy lessons were a social event in the 17th century, taking place in lecture rooms that were actual theatres, with students, colleagues and the general public being permitted to attend on payment of an entrance fee. 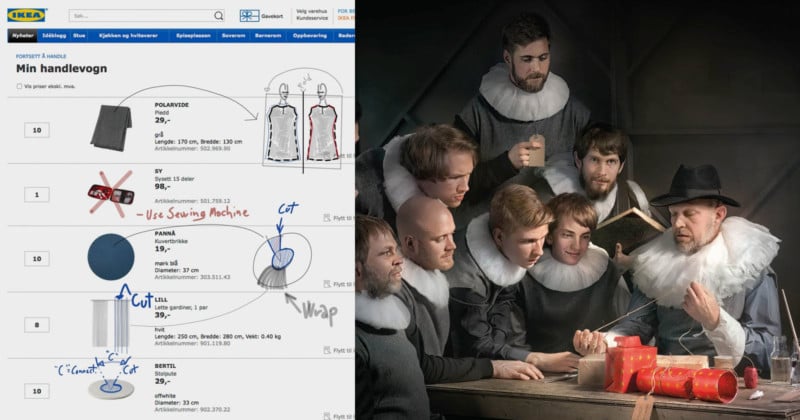 Known for his artistic, playful, and often unconventional approach, he used only standard IKEA products to stage the scene. Even the costumes he designed and made used IKEA fabric. Since establishing his creative bureau dTurbine in 2006 he has specialised in theatre photography and advertising, seeing each project through from idea stage to art direction and graphic design. “My base idea was to make something interesting and relevant for the camera store business while adding an element of surprise in the form of a retrospective perspective,” he said.

He used Polarvide throws for fabric, a Sy 15-piece sewing kit, Lill curtains for the ruffs and Bertil chair pads. The collars were considerably easier than your average ruff as the models made their own with just a 20-minute workshop beforehand using knives, scissors and staplers.

Dirdal is certainly not the first artist to use IKEA products for costuming. Last year Lauren Stowell of American Duchess made an 18th Century dress from IKEA curtains to dazzling effect. “Yes, the floral is from Ikea. Huzzah for curtains! I was very happy with this textile – 100% cotton with a linen-ish look, lightweight enough for a gown, and with a pleasing design,” she said. “My only quibble – if one can even quibble when one is using curtains for costuming – is that the design is screenprinted on and a little tough to get a needle through in some places.”

Ninya Mikhaila - The Tudor Tailor of a Stitch in Time

Meet the Jeweller Behind #GeorgianJanuary