The Thénardiers offer a rare glimpse of comic relief in Les Miserables. The disreputable landlord is a battlefield thief turned brothel-keeper while his lyrics in Master of the House do little to redeem himself – to the extent that we feel ashamed for finding this scene so hillarious. Sacha Baron Cohen was beautifully cast for this role in Tom Hooper’s 2012 adaption (even if it did not require much venturing from his typecast Ali-G back catalogue) but his landlord outfit was a great aid to such a portrayal and differs from most previous interpretations.

“The ladies’ dresses were very appealing. I really enjoyed designing for the comedy characters played by Sacha Baron Cohen and Helena Bonham Carter. As pickpockets and ruffians they were expressing a kind of freedom and it was refreshing to represent that with a freer use of fabric and colour,” the designer Paco Delgado told Stylist Magazine. 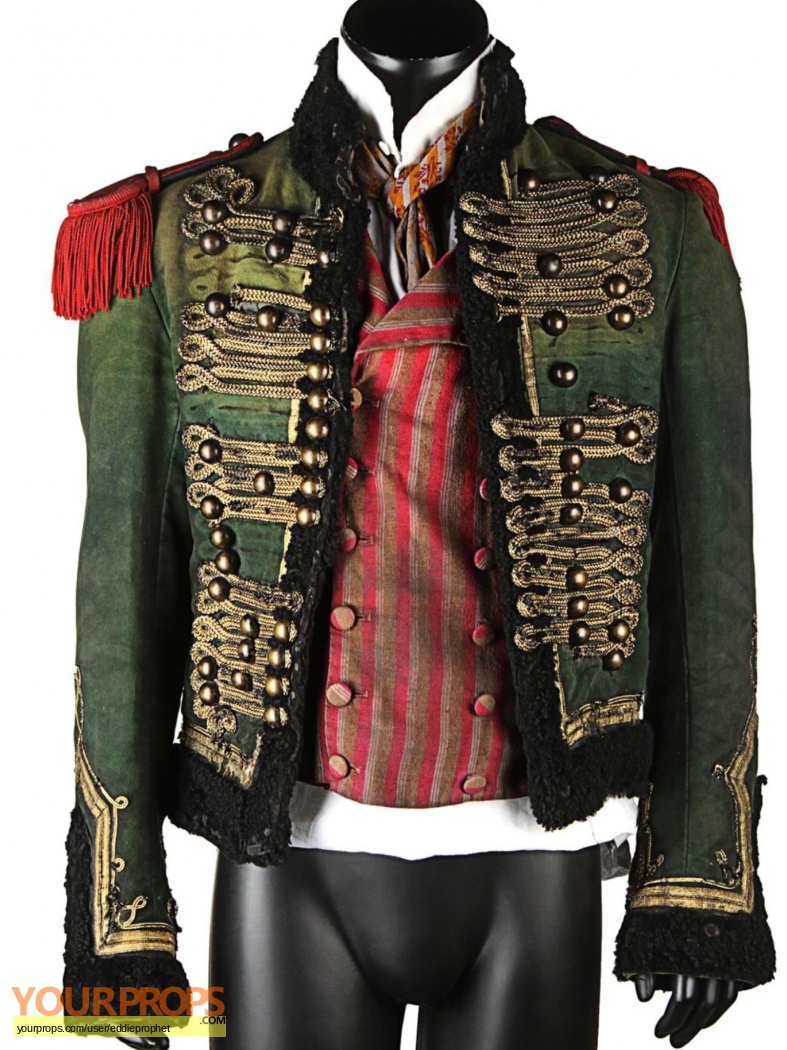 He also spoke in depth to the National Post about the creative process that resulted in the green hussar jacket. “We thought of them like being magpies, stealing everything as they do, and thought we could incorporate that idea into their costumes. Everything else was so intense — like trying to bring all these ideas of holiness inside a costume,” he said. “Then suddenly you have these two great comedy actors — and Sacha Baron Cohen is like a clown, really. In the book he says all the time that he was at Waterloo, helping Napoleon. We thought he would have stolen his jacket, which is almost rotten by the time he has got it, not from a simple soldier but from a general! Madame Thénardier, Helena Bonham Carter, has a mix-match of a lot of ideas in that costume — a very old matador sleeve, cut up and used like a collage on her.”

“Master of the house, doling out the charm
Ready with a handshake and an open palm
Tells a saucy tale, makes a little stir
Customers appreciate a bon-viveur
Glad to do a friend a favor
Doesn’t cost me to be nice
But nothing gets you nothing
Everything has got a little price!” – Thenardier

The uniform made by Academy Costumes was sold in 2016 by the Prop Store auction house for £1000. “It consists of a green Napoleonic Hussar jacket, a white shirt, a red and brown striped double-breasted waistcoat, and a yellow and blue striped necktie,” said the listing. “The jacket is made from green felt material featuring rows of faux-gold braids with round metal buttons along the front. Red fringed epaulettes sit atop the shoulders and the collar and cuffs are edged with black faux-fur.” [amazon_link asins=’B009K1UC3K,B00Z3PKDFY,114248243X,B01FEPL6C6,B075HFGK5P,B01AH44CES,B075QJJZ18,B003WPJEYI,B01L6SD8DK’ template=’ProductGrid’ store=’costumerag-21′ marketplace=’UK’ link_id=’76b332ed-e743-11e7-ae62-79852a377635′]