Women’s 1950s fashion is a popular retro style and yet can be interpreted in many different ways.

To some 1950s fashion represents improving economic conditions after the war as well as the advent of new media and culture. On the other hand, many see 1950s fashion as encapsulating many social issues that continue to this day.

Is the extreme femininization through 1950s fashion of the women of the 1950s due to the fact that they had to be as glamourous as possible to capture a husband?

After all, there were slim pickings following WW2, worldwide some 15 million soldiers died, and about the 3% world’s population died in total.  Or, were men just ensuring that women were once again enslaved by their fashions and drummed out of the workforce into the suburbs as Stepford wives….?

Think of the difference between the natural, flowing beauty of Brigette Bardot in And God Created Woman versus the uptight sophistication of Doris Day in Hitchcock’s film The Man who knew too much – both films released in 1956. 1950s fashion was therefore varied and constantly changing.

Also, the bolero comes into fashion.  Fashionable jackets this year are close fitting, in a variety of different lengths, from just below the waist to the hip, they could also be low waisted and bloused or loose.

Other trends include horseshoe collars, and exaggerated pockets on jackets and coats. Balenciaga introduces the bouffant skirt for eveningwear.

Balenciaga’s bouffant skirt develops into dresses that have hems that dip at the back and curve up at the front, ballooning out over a narrow sheath.

The designer Jacques Fath, following the ‘geometrical style’, kept his silhouette to the triangle in his Spring/Summer collection.

In America, the new casual look emerges; a smock worn over Levi Strauss jeans or a flared or straight skirt.

1952 – Comic heroine Daisy Mae marries her sweetheart Li’l Abner – in a very revealing polka dot dress, though she has been dressing in polka dot since the ’40s.  Her cartoon character’s style inspires its own fashion label.

1953 – The Queen’s Coronation Dress is designed by Norman Hartnell.  It’s the eighth design that finally fulfils the brief to be wearable but also appropriate to the religious and royal symbolism of the occasion.

The coronation helps to draw the world’s attention to London designers and they take the opportunity to promote traditional British fabrics such as Tweed, and the colours and styles of evening dresses of the season are inspired by the coronation dress as white pink, gold and mushroom.

Dior introduces his striking Tulip line where the bodice is padded out across the bust and sleeves are short and puffy, almost petal shaped.  Audrey Hepburn stars in Roman Holiday.

Innovations in new, lightweight stretch fabrics help to make the tapered trouser fashionable from this year.  Similar, cropped-style trousers emerge, known as Capri or Pirate trousers.  They become common for day-to-day wear, teamed with a thick-knit jumper worn with a sweater girl bra.

1954 – Dior attempts to abolish the bosom – H-line, as the letter ‘H’ implies, was straight with a slight accent on the waist (the bar of the ‘H’). The H-line featured tight skirts that finished just below the knee and long coats or jackets that had detailing set on the hip to define the drop-waist crossbar of an H.

Coco Chanel reopens her fashion house in Paris and reintroduces her relaxed, wearable suits and dresses. She needed to boost her perfume sales which were flagging, but she also returned to the couture fashion scene to fight what she called the ‘50s horrors’ of the imprisoning artificial fashions of the male couturiers such as Christian Dior.

She introduced ‘the Chanel suit’ which is still highly popular today; a slim, tweed number with contrasting bound edges, which aimed to offer an elegant but comfortable alternative to the New Look nipped waists.  Schiaparelli presented her final collection which introduced Bateau necklines.

This year also saw the introduction in the US of the Stocking dress – the start of disposable fashion – it was a tightly formed, cotton fabric dress that could be bought several at a time and worn just once before washing. Roger Vivier, working for Dior, invents the modern stiletto heeled shoe by using a thin rod of steel in the heel to strengthen it.

1955 – Dior introduces the A-line, which consists of suits, coats and dresses which have narrow shoulders that flared out into a wide triangle. The cross bar of the ‘A’ can sit either low on the hips on just under the bustline, like the empire dresses of the previous century. Balenciaga begins a gradual move to a looser silhouette with mid-length line, collarless tunic dresses with low pockets.

William Travilla designs the Seven Year Itch dress for Marilyn Monroe.  Bazaar, Mary Quant’s boutique, opens on the Kings Road in London and for the first time, all the clothes are aimed at a younger clientele, under the age of 25 – the beginnings of the “youth-quake”.

James Dean stars in Rebel Without a Cause and becomes a cultural hero and an icon to teenage fashion – his crisp white T-shirt, Lee jeans and red Harrington (Blouson) jacket become synonymous with cool.  He also dies this year in a car crash.

Mid ’50s – Thanks to figures like Marlon Brando, James Dean and Elvis Presley, the sales of blue jeans begin to sky rocket.

1956 – Grace Kelly marries Prince Rainer III of Monaco.  And we see the launch of Velcro as a product.  Elvis Presley begins his ascent of the music and film industries.

Brigitte Bardot stars in And God Created Woman, and whilst making this film, Bardot asks Rose Repetto to create the Cendrillon Ballerina’s flat shoe for the film, a style which is still widely available today.

1957 – Balenciaga brings in the Chemise or Sack dress.

Audrey Hepburn stars in Funny Face, she plays a dull bookseller who’s transformed into a model by fashion photographer Fred Astaire. Hepburn’s and Astaire’s characters are inspired by Vogue Editor Diana Vreeland, and fashion photographer Richard Avedon.  Costumes are designed, of course, by Edith Head, but a lot of Hepburn’s clothes are provided by Hubert de Givenchy.

1957 also sees the start of the space race with the launch of the Soviet satellite Sputnik – an event that feeds through into fashion – in fabric design and jewellery – with Sputnik-inspired rings and cufflinks.

1958 – Twenty-one-year-old Yves Saint Laurent, who took over the house of Dior in 1957, shows his first collection and introduces a new silhouette, the Trapeze.  The look was when a dress sloped down from the shoulders to a widened hem, just above the knee, with minimal decoration, no cuffs and a simple collar, or sometimes a collar with a bow.

1959 – La Dolce Vita is released – a film about the glamourous life of the rich and famous in Rome.  Brigitte Bardot gets married to Jacques Charrier in a simple pink gingham dress, kickstarting a fashion craze for that fabric.

At the high fashion couture shows extraordinary silhouettes emerged from Italian designers Barentzen and Simonetta with huge wide padded skirts and exaggerated collars that almost covered the face and in some cases doubled up as capes.

Dior introduced suits with skirts that could be forerunners to the puff ball skirts of the 80s with the normal hem ending at the knee and a puffed out higher second hem 6 inches higher up. 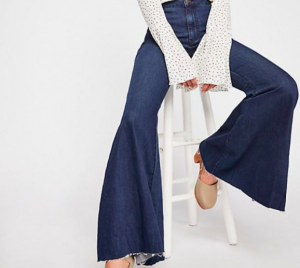