Belgian contemporary artist Isabelle de Borchgrave is a painter who creates stunning replicas of historical dresses in paper. The late designer Hubert de Givenchy called her “one of a kind; with a single sheet of paper, she creates the most beautiful dresses, the finest costumes, or, simply, a chain of white roses…Whether it becomes a shoe, a hat or a few strings of pearls, [Isabelle plays] with paper as a virtuoso plays an instrument.”

De Borchgrave began working in trompe l’œil paper works after a visit to the Met in 1994 and eventually made four major paper fashion collections. These have been brought together for the first time in an exhibition by Dixon Gallery and Gardens with the Oklahoma City Museum of Art.

The first, Papiers à la Mode (Paper in Fashion) covers three centuries of fashion history from Elizabeth I to Coco Chanel and was made in collaboration with renowned Canadian costume designer Rita Brown. As it travelled through its first exhibitions de Borchgrave expanded it with costumes from the wardrobes of Queen Elizabeth I, Marie Antoinette and the Empress Eugénie, consort of Napoleon III, while it was in Japan, and adding Ottoman kaftans in Turkey.

The World of Mariano Fortuny recreates pieces from twentieth-century Venice.

Splendor of the Medici leads visitors through the streets of Florence, where they come across famous figures in their rich ceremonial dress.

The collections are being displayed together for the first time in a new exhibition by the Dixon Gallery and Gardens with the Oklahoma City Museum of Art.

Organizing partner Frick Art & Historical Center commissioned de Borchgrave to create a gown inspired by a special work in their collection: Peter Paul Rubens, Portrait of Charlotte-Marguerite de Montmorency, Princess of Condé, ca. 1610. Both the dress and the original Rubens portrait will be on view in this exhibition.

“This exhibition will be the culmination of a fruitful collaboration among several institutions,” explained Oklahoma City Museum of Art president and CEO, E. Michael Whittington. “The work began several years ago when the OKCMOA team and our colleagues met with the artist in her Brussels studio to explore the possibility of a retrospective that would tour throughout the United States. I am especially appreciative of Kevin Sharp and the Dixon Gallery and Gardens staff for their lead role in organizing this project.”

“We are thrilled to host Isabelle de Borchgrave’s work in Oklahoma City,” added Director of Curatorial Affairs Dr. Michael J. Anderson. “As one of the most prominent artists working in Europe today, de Borchgrave is well known for her creativity and ingenuity in the fields of painting, fashion and paper sculpture. Visitors will be amazed at the intricacy and beauty of her artwork and surprised to know she crafted the work in this exhibition using just paper and paint.”

If you’re impressed by historical costumes made out of paper you’ll be amazed at what these wedding dresses are made of! 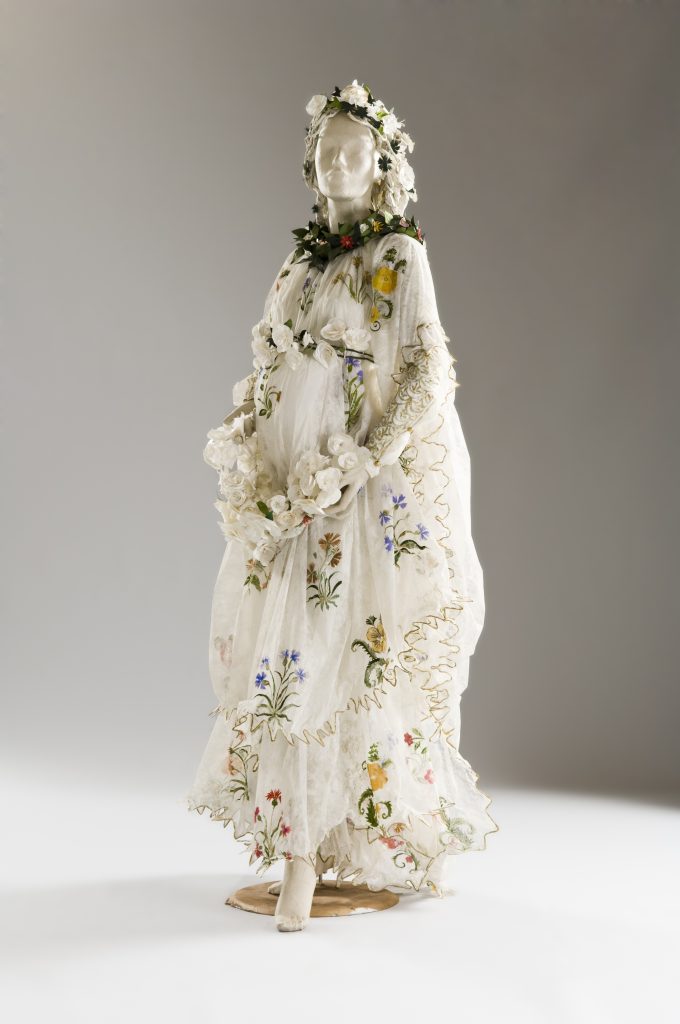 Photo: Andreas von Einsiedel;Isabelle de Borchgrave, Flora, 2006, based on the ca. 1481-82 painting La Primavera by Sandro Botticelli in the collection of the Galleria degli Uffizi, Florence.

Header image:  Photo: Andreas von Einsiedel; Isabelle de Borchgrave, Maria-Maddalena d’Austria, 2007, based on a 1622 portrait of Maria-Maddalena with her son Ferdinand II by Justus Sustermans in the collection of the Flint Institute of Arts, Flint, Michigan.

Is it Ever Acceptable to Say "Tacky?"

Antonio Banderas: What the Designer Gave Me Was Extraordinary