Every year the palace of Versailles opens its doors for the incredible Fêtes Galantes – a ball to recreate the French court of Louis XIV. The standard of dress is impeccably high as is the price tag to match. For many historical costumers Versailles represents the ultimate party in a venue that doesn’t normally allow costumes.

“Would you like to try baroque dancing and learn with the best dancers?” said the organisers. “What about performing a magnificent dance with them in the Hall of Mirrors? Would you like to go from the intimate music of a baroque drawing room to the religious atmosphere of the Chapelle Royale, to discover baroque billiard or trictrac the ancestor of backgammon after walking through the Salon d’Hercule, where dancers are celebrating the minuet?”

We spoke to Wendy de Glee who attended this year’s event to get the inside story of the royal party so that anyone hesitating over tickets in future can learn what they might miss.

The ball is an expensive event. How worthwhile do you think it was considering the cost?

“This is always a diffcult question. Yes, it is expensive. And there will always be people who’ll expect more for their money. But you must consider the fact that you’re in Versailles, a truly beautiful and centuries old castle. You do pay for the location and for the privilege of attending a ball in one of the most famous halls you can imagine, the Hall of Mirrors. You can compare it to the famous balls in Venice during the Carnival that are expensive but also a once in a lifetime experience. You are paying to be transported back to the 18th Century and experience the castle as it was in the days of The Sun King and Marie Antoinette. In my opinion that’s worth the money.”

The tickets are tiered from the Marquises and Marchionesses (150eu) to Dukes and Duchesses (285eu) and the premium Kings and Queens ticket 410eu that includes a private visit of the Opera Royal.

“We bought the Duke and Duchesse tickets and included was a buffet and free drinks all night. With these tickets we also had a concert, a tour of the King’s private rooms and baroque dancing lessons. If I would go again, I would most likely get the same ticket option.”

What was the entertainment like? How did it feel to surround yourself with likeminded people in such a setting?

“There was live music at the entrance when arriving at the castle. The same musicians were playing in the Hall of Mirrors during the evening. Although a concert was included in the ticket I would have loved to hear more of that during the evening. There were dancing performances in one of the salons, however we managed to miss a lot of that because of our other activities. We only saw that once at the start of the evening. And there were several games in two games rooms. Fun to see, but we didn’t get a chance to try them because there were always other people playing. I would say with the number of people attending a few more games would have been lovely, increasing your chance to actually try them.”

“But the main attraction is of course the chance to walk around in a beautiful lit grand 18th century castle surrounded by people all wearing beautiful 18th century attire. The feeling I had when walking into the Hall of Mirrors in my robe a la francaise was what made it all worth.That was something really special and I just couldn’t stop smiling. Hard to believe I was actually there!”

The event organisers specifically emphasise the quality of costume required so that this remains an enchanting reenactment rather than just a fancy dress party. “You must come dressed in a quality baroque style costume and be wearing it when you arrive at the Palace,” they said. “No access will be granted to anyone not respecting the appropriate dress code.”

With a global attendance how did different languages work?

“Languages was no problem at all as most attendees speak english. I did see quite a few people I met online, so it was wonderful to actually meet them in real life.”

Did you feel truly transported to another world or just a museum? Should more museums open similar events?

“Versailles did not feel like a museum for me that night. For me the feeling of being in another world really came true, mostly because of the dresscode. Everyone needed to be in costume. Granted a lot were rented costumes, but then again not everybody is able or willing to make their own gowns. But the fact that every attendent was dressed up really made a difference to the overall feeling. If there for example would have been people in other clothing than 18th century (inspired) gowns/suits (for instance normal evening wear), the feeling would have been entirely different. Now you could really imagine being transported back in time a few centuries.”

I would love if more museums/castles would do similar events. I love to go castles in gowns I’ve made but alas it is not always appreciated.”

The most exciting part – what did you wear?

“I immediately knew I wanted to make a robe a la francaise for myself and an embroidered court suit for my husband. I did quite some research and looked up a lot of paintings for inspiration. After ordering a lot of fabric swatches and finding the right court suit I wanted to create, I could design my own gown to match the court suit. As the court suit was going to be a wonderful teal/black silk taffeta, I decided to make my gown blue as well. I added a lot of gold embroidery inspired of course by the richness of Versailles. For decorations I once again took inspiration from paintings. I didn’t exactly copy a painting, but in the end went with the pleated trim which just felt right.”

You can view de Glee’s construction photos below. 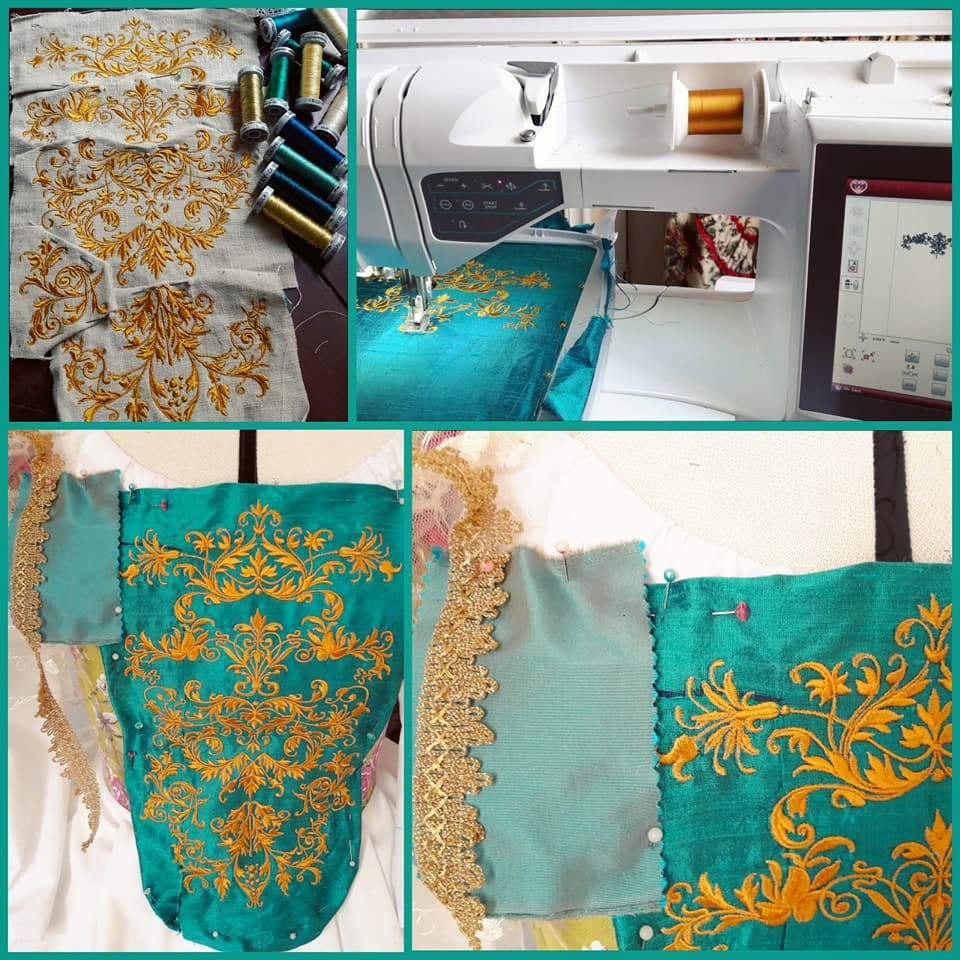 “Test embroidery for my stomacher. I’m thinking of making an embroidered stomacher for my robe a la francaise and thought it would be a good idea to play with some of my embroidery designs. I quite like this look. Mind you the embroidery is done on a leftover dupion scrap of my mermaid fairy gown and this is NOT the fabric I’ll be using for my gown. The silk taffeta I bought for my robe is the swatch pinned next to the test stomacher. Also this may not be the actual thread colour I’m going to use. It’s just a gold thread of which I had enough for the test enbroidery at the moment. I guess it’s a good thing I will not be using this dupion for my gown, because even though it looks striking it also looks rather kitsch.” 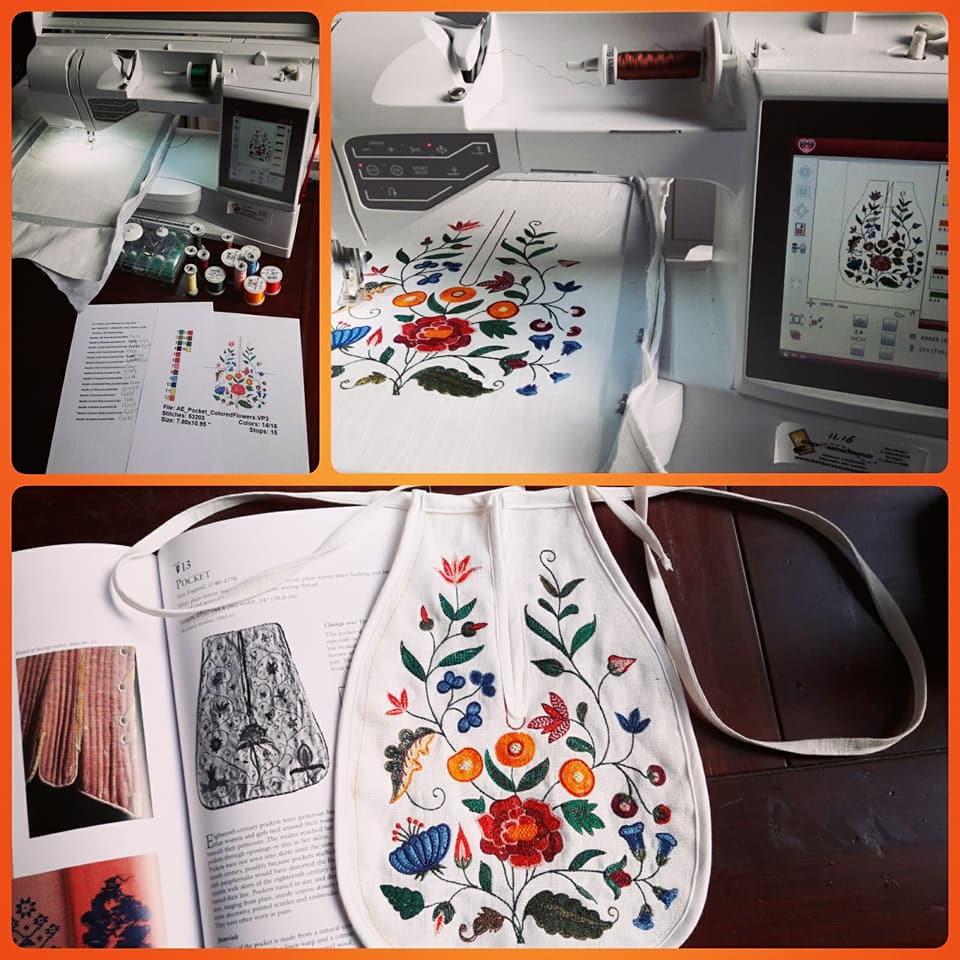 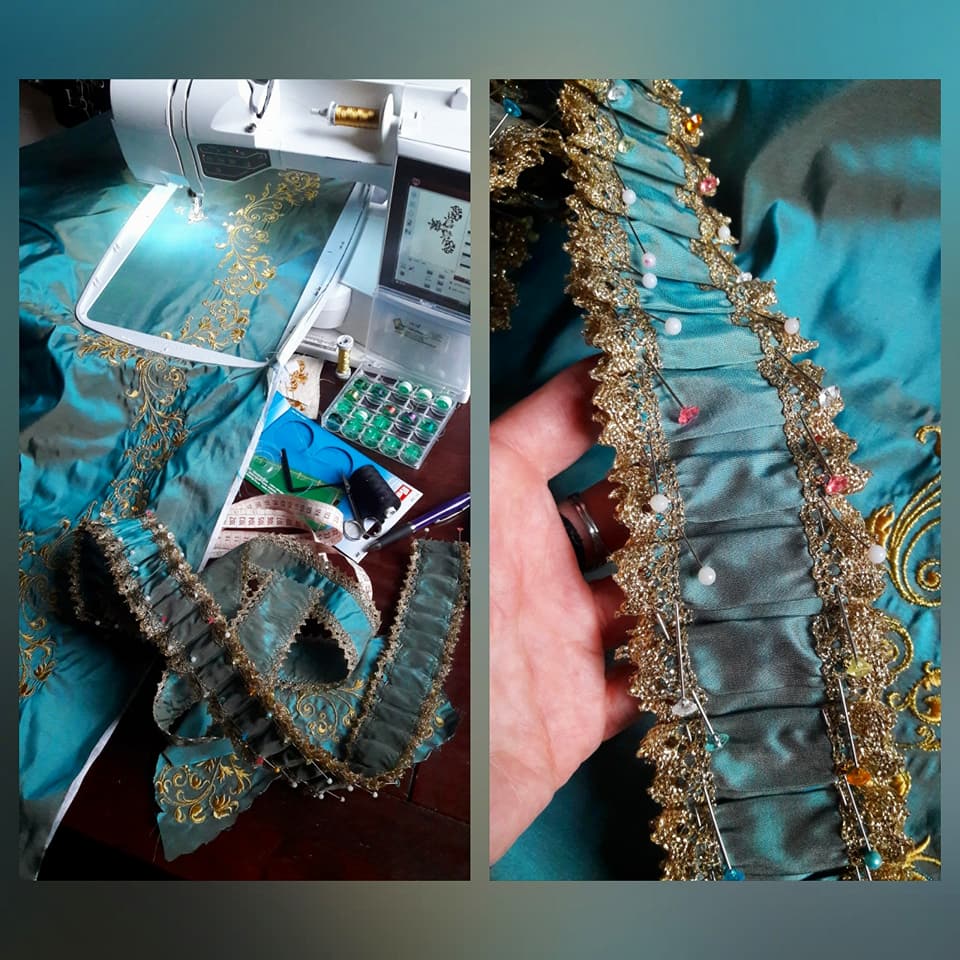 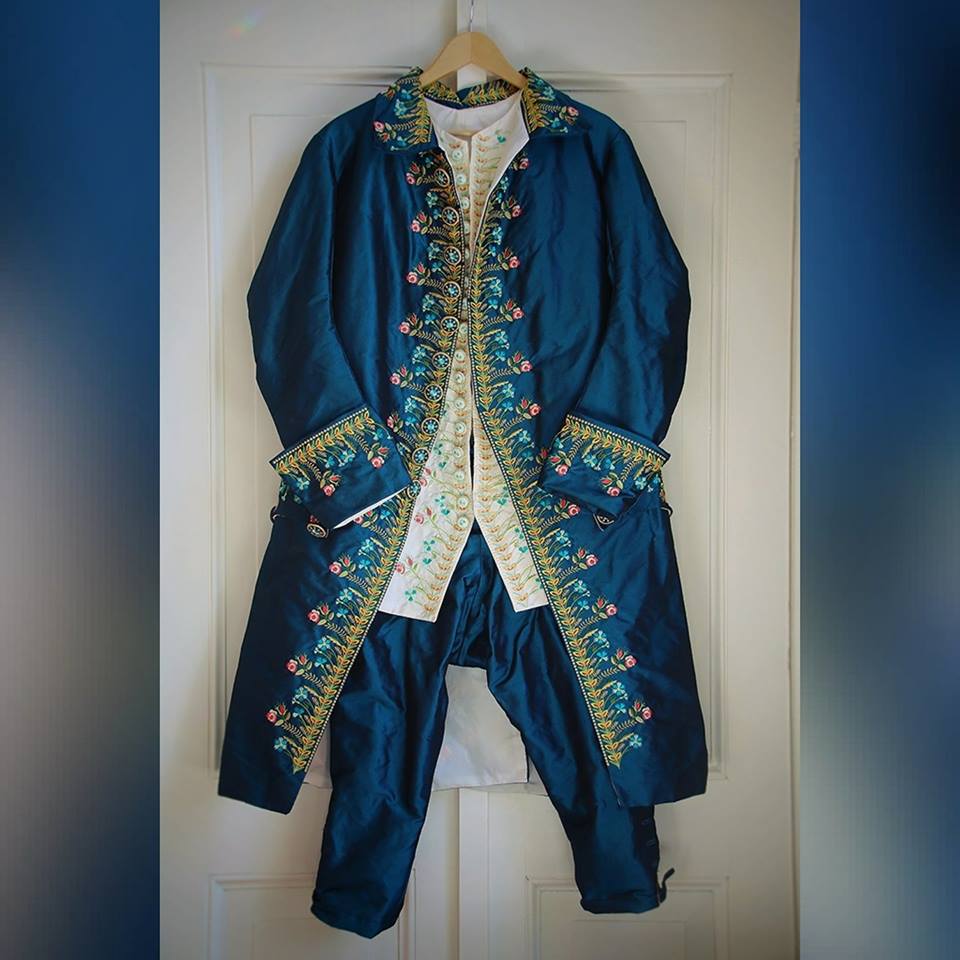 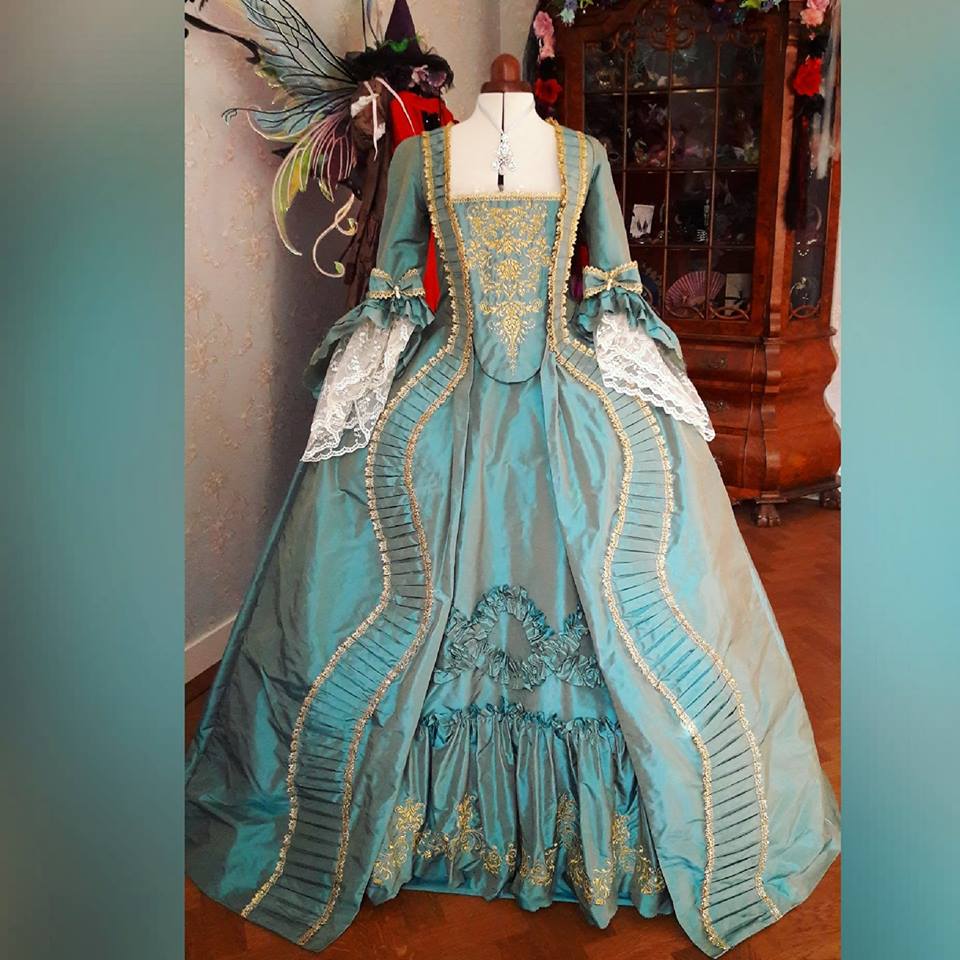 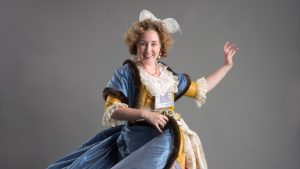 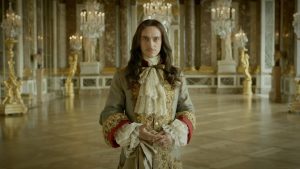