How did Napoleon Change Fashion?

The Napoleonic Wars had a profound impact on European culture, not least in fashion. Britain experienced the ‘Regency’ almost simultaneously with France’s ‘Empire stye’. In Paris this could be seen in the adoption of Egyptian clothes and Prussian styles after the conquest at Austerlitz in 1807. During the French Revolution in the 1790s, the rise of alternatve styles grew out of the unanimous, uniform style of the ancient regime. Therefore in embracing the new Republic, new styles of dress became obvious points of visual representation.

The Threat of Luxury

During the Terror it became necessary to ensure one was not mistaken for a royalist but after the fall of Robespierre a highly flamboyant take on English styles of dress grew popular under the Directory. The ‘Empire’ style of Napoleon’s rise ended the frivolous fashions enjoyed under the Directory. Napoleon’s invasion of Egypt imported new themes of Orientalism into French dress such as the Mameluck tunic, although Laver argues this was only for a short period before the Peninsular War made Spanish styles more popular.[1]

In Britain as of Napoleon’s first abdication in 1814, women’s fashion had returned to the romanticized Elizabethan style but started to favour the more refined French style. In contrast, the innovations of London tailors working with structured cloths following the ideas of Beau Brummell allowed the fine tailoring of the modern suit, quite apart from the flimsy silks of the past century. The adoption of military styles into civilian life is understandable, given Napoleon understood like all great dictators the importance of a well dressed army.[2]

Naturally, military costume was the defining view of a battlefield of many thousands, and the Grand Army had to resemble the grandeur of the Napoleonic Empire for the practical concerns of physical intimidation as much as nationalistic pride. This combination of nationalistic pride and masculine, warrior-style naturally seeped into the civilian fashions of the time and onwards. Hats started to resemble helmets and bearskins. [3] Even women’s head-dresses were inspired in 1815 by allied officers through high crowns and feathered cockades. Civilian pantaloons became adorned with braiding akin to those of the iconic Hungarian-originated Hussar uniforms.[4] This would begin a tradition of the seizure of military style for high fashion that would reach from ladies’ riding habits of the 1880s through to Jimi Hendrix and Adam Ant. With Europe ablaze this was a time of distinct, varied armies and their style crossing paths quite unlike any other conflict. 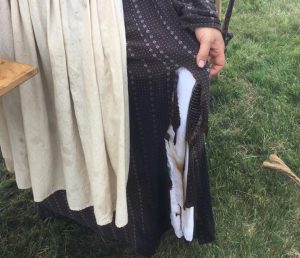 The REAL Danger of Synthetics in Period Costume 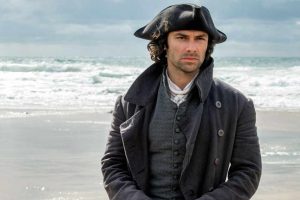 First Glimpse of Poldark’s New Costume (And Without It…) 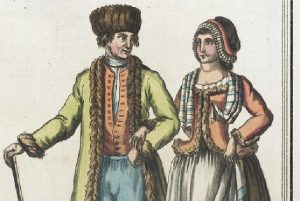 Diplomat Captured Costumes of Diverse Classes and Cultures in 1797 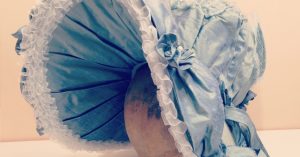 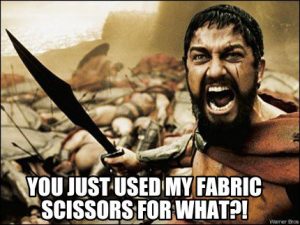 We Asked You For Your Worst Uses of Sewing Scissors…