Recreating the Grande Descente of an Ocean Liner

The luxurious staircase that formed a quintessential part of every elite 20th Century ocean liner was a profound showcase for the outfits of fashionable patrons. The V&A recreated this event in its exhibition Ocean Liners: Speed and Style with a projection of figures descending a mockup staircase in replica 1920s couture eveningwear. For many passengers the highlight of each day at sea was the theatrical descent from the upper decks into the dining room where they could see and be seen in their most elegant eveningwear. 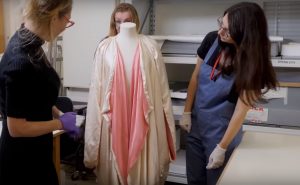 Curator Anna Ferrari said the setting was a great stage for social display on an ocean liner. “In the exhibition we’re recreating a grande descente to make sense of this daily ritual. The garments we’re recreating belong to Ms Emilie Grigsby, a New York socialite. She travelled on liners between Europe and America. She wasn’t afraid to wear quite shocking fashions for the time. The costumes in the exhibition are museum pieces that can’t be worn so theatre costumiers are going to come in and study the garments with textile conservators and make replicas. They can then be worn by a model who will then bring them to life.”

Costume maker Madeleine Frye said seeing these costumes move is a very different experience to a still mannequin in a museum. “I’m used to making clothes for performance the costume is moving the garments in the museum are static. It’s only when you’re trying to recreate something that you really get to understand how it was put together. They are incredibly simple. The cape is made from two rectangles and drapes beautifully. When we were talking about the brocade dress the original was a woven fabric with metal thread. Technically it could have been rewoven but would hae cost thousands of pounds.” Instead the team digitally printed the pattern of the fabric and used glitter highlights to enhance the texture. “It’s always a challenge trying to recreate something from a past era for a modern body but I think these garments work very well. They are just timeless and I think it’s time to make them live again.”

“I saw that in a nickleodeon once”

Who could forget perhaps the most memorable depiction of the grande descente of an ocean liner in popular culture in James Cameron’s Titanic when Rose steps down like an angel to the awaiting Jack Dawson. Indeed the staircase forms a constant motif throughout the film, from the luxurious opening to the horror as water bursts through the glass ceiling, and finally the heavenly dream when Rose posthumously returns to Jack waiting by the clock.

In the V&A’s exhibition an elaborate plaque that would have held a similar clock from the Titanic’s sister ship the Olympic is proudly displayed with an array of Edwardian interior pieces. In one French screen of dark wood there is a constant homage to the grandeur of Versailles with Louis XIV’s sun motif depicted throughout.