Halloween is fast approaching and if you’re struggling to find inspiration, why not look to the biggest thriller/horror franchise of the 2010s. The Purge deals with themes of inner-savagery, America’s racial tension, human morality and the dilemmas and questions a civilised society must face to uphold its values. Would it be as successful without its unique mask designs though? These masks are defining staples of the film posters and advertising campaigns despite the fact that they do not dominate The Purge‘s storylines. Just like the Slipknot masks, they form an ever growing and changing collection that fans will do anything to own (providing it’s Purge night!).

If you’ve been hiding in a cave over the last few years and haven’t heard of these films and the spin-off series on Amazon Video then ready your pen and notebook. The Purge is set in the home of a well-to-do middle class suburban family and is about one night of state-approved lawlessness in America. An alarm sounds and every citizen is allowed to exercise their rights. All emergency services will be out of action until the same alarm sounds at dawn.

The follow up took this same idea into a wider urban cityscape and the audience see full-on warfare on the streets as opposed to following just one family’s turmoil. Election Year took the story right to the heart of US politics and the democratic system and was released, significantly, in 2016. The First Purge (the fourth to be released) is a prequel which deals with the origin story and tackles the issues and discrimination faced by Staten Island’s black communities from desperate socio-economic backgrounds. The Amazon series deals with a complex web of characters and looks at injustice across the class system in a world where society’s most seemingly trusted can turn out be rapists and killers. Masks are not at the forefront of The Purge. Masks are instead used cleverly throughout the franchise to mark the ritualistic and tribal natures of what people become on these nights. Masks are always nearby, threatening, looming and waiting in the background.

1. God Mask from The Purge: Anarchy

The character who wears this mask is instantly menacing in The Purge: Anarchy, the second in the franchise. ‘God’ is scrawled across the forehead and this very literal expression shows that anyone can seize catastrophic power on this night. Its wearer is a trader but not your average trader. This character abducts anyone he can find and sells them to society’s most elite so they can enjoy ritual killing in a safe and guarded environment.

2. Kiss Me Mask from The Purge: Election Year

This mask is bound to make you the most feared Purger of the night! Its homemade nature captures the spirit of the franchise. It features jagged teeth like the drawings of a child and looks as if the eyes either sewn or dripping with a melting effect. The ‘Kiss Me’ message shows the dark comedy of the franchise as even teenage girls take to the streets with their gangs of murderesses.

This is worn by a character who is instantly loathed despite barely being adult age. This character is psychotic, destructive, sly, pettie-natured, greed-driven, determined to get their own way at any cost and completely undisciplined by the adult world – like a female Geoffrey from Game of Thrones.

3. Cross Mask from The Purge: Anarchy

The Purge Anarchy was the moment when the franchise went from the suburbs to the inner city and explored gang culture and the class system of its dystopic universe. Just like the wearer of the ‘God’ mask, this Purger goes wherever the money is and on Purge Night, that means transporting people into the hands of the elite.

This mask is a statement on the godlessness of the night with its cross and stitched up mouth. Its dark circular panda eyes drip with glee at the lawlessness and chaos of the night.

Liberate yourself this Halloween with this iconic classic from the third film. This mask wearer is part of a gang of blood-thirsty killers and abductors, all of which dress up as sinister versions of American national icons like Uncle Sam, Lincoln and Washington. These liberty spikes would make even Rick and Morty’s older half green with envy.

“Blessed be our new Founding Fathers”

So what will it be? Are you feeling like an omnipotent ‘God’, a lawless brat who always gets her way, a creepy Antichrist or a twisted inversion of the USA’s most prominent monument?

Although Purge Night starts at 7 PM on the 21st of March, these unmistakable masks are perfect for Halloween and are, in many ways, a reflection of people’s dressing up habits on October 31st. Although this franchise straddles the genres of thriller, crime, sci-fi and dystopia, it is the intricately designs masks that keep The Purge rooted in horror. 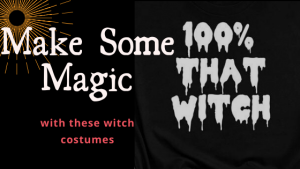 Make Some Magic with these Witch Costumes

The Joy of the Bob Ross Costume

Arrrn’t These the Best Pirate Costumes?